Hooray! The water butts are all full, the grass is showing signs of recovery (it’s always making room for more plants so there’s not a lot of it) and the plants in the borders are looking much happier. We’ve had significant rainfall in the last week, mostly while away in Falmouth so all is good. Well, if I can have a tiny moan, it’s been rather/very  windy and pots keep blowing over………..

Anyway, time for this week’s Six on Saturday.

1. The only veg that I grow now are tomatoes and peppers in the glasshouse. It’s been a tricky year as it’s been so hot but the peppers have suddenly all come on at once. I grew one grafted bell pepper (to see if it was worth paying the extra), three regular bell peppers and one chilli pepper. There was, sadly, quite a period when the fruit either didn’t set or else fell off when tiny. I’m blaming the heat. I normally grow them at ground level but tried them on the bench this year so that they could have more light! Although there’s net to shade them I think they are too near the roof now. 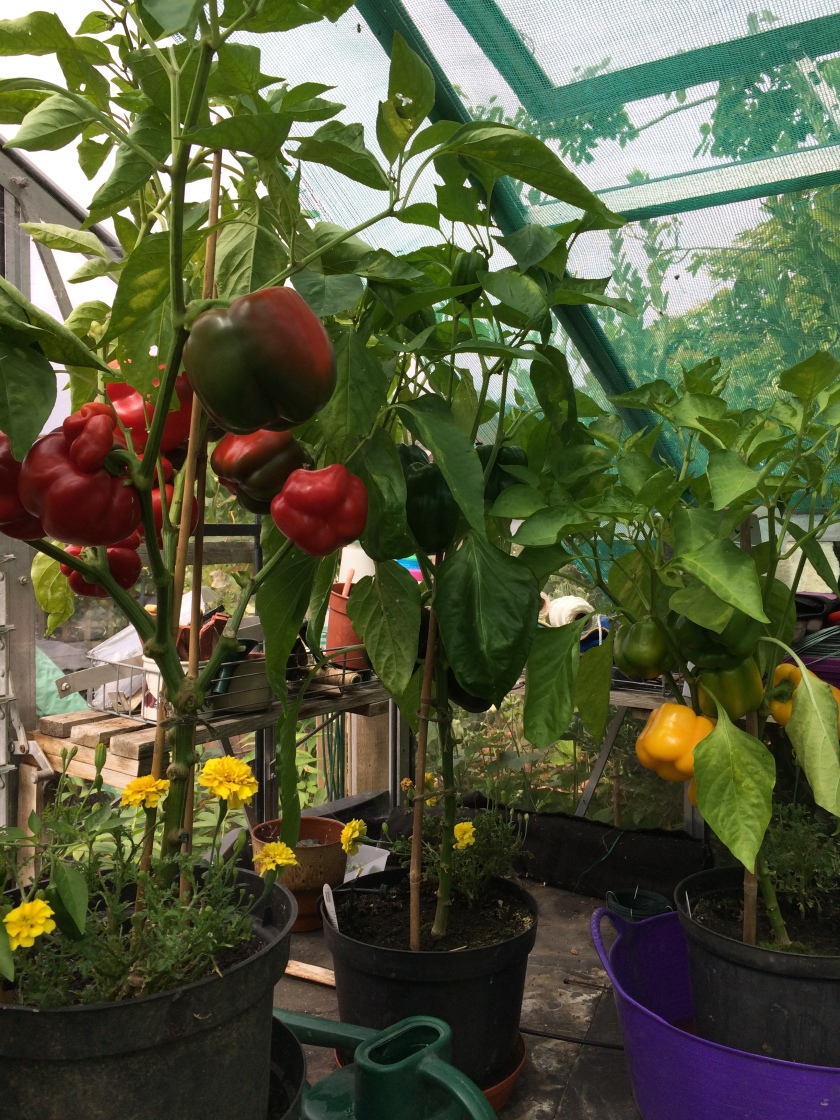 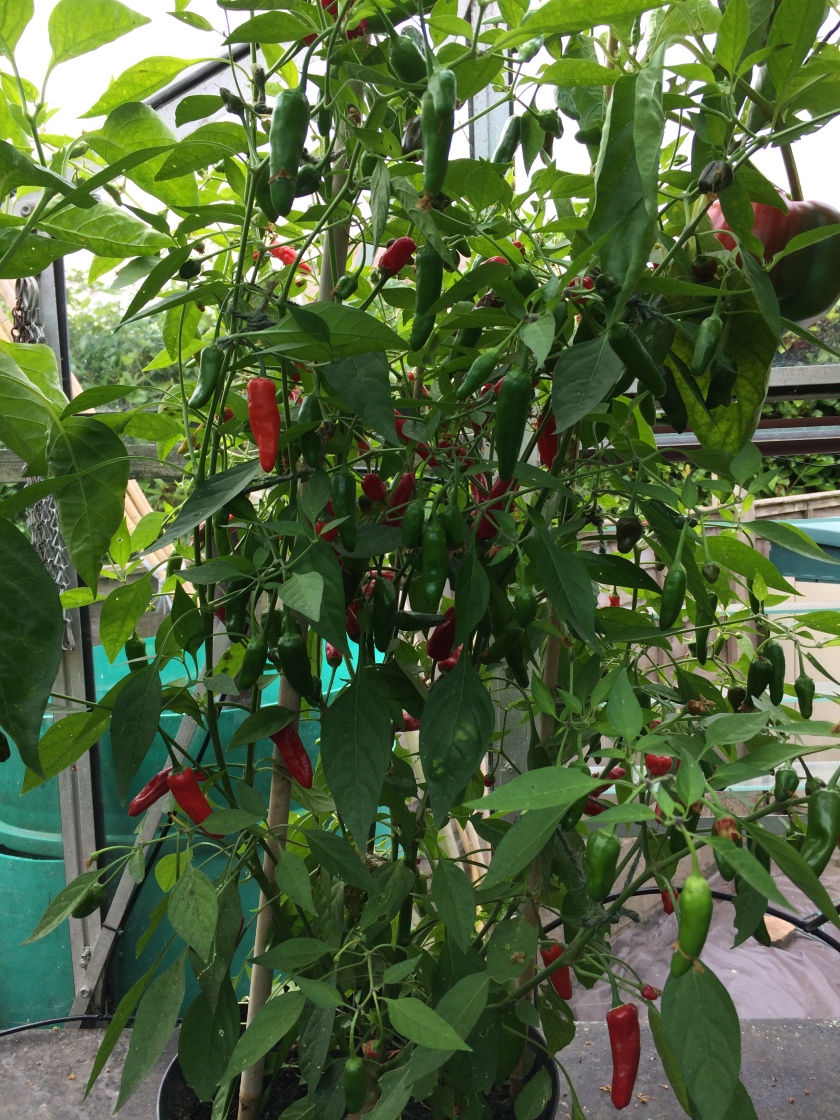 I hadn’t noticed the bindweed coming up in the corner until I wrote this! My neighbour cultivates it along with brambles (sorry, blackberries).

2. After being away for a few days there was a lot of deadheading to do. The rain has brought all of the SnS out from their hidey holes but I didn’t think they were responsible for this damage to a fuchsia in a pot.

Elephant Hawk Moth caterpillars. I’ve never noticed them in the garden before and have never seen the moth. They’ve been re-homed in another part of the garden.

3. Whilst on the subject of monsters, this Dahlia has been left in the ground for the last two winters. It’s one of three that I grow in a small border for cutting. They grow to about a metre and a bit tall. Two of the three have struggled this year but this one is a good two metres tall with stems like bamboo canes! You can have too much of a good thing sometimes.

4. The hanging baskets (all two of them) have survived the heat due, I think, to the automatic drip watering system. They’ve had the occasional top-up water when I’ve fed them but, overall, they’ve had far less water than I’d normally give them, half of which usually runs out of the bottom of the basket.

5. Behind this sleeper is a tiny border with a rather large Viburnum bodnantense ‘Dawn’ on my boundary with next door and a Lamprocapnos (Dicentra) spectabile. The front of the bed has snowdrops in the spring and then this Hakonechloa macra ‘Variegata’ grows through as the snowdrops die back. There’s a bit more not in the picture and it’s taken a few years of dividing and replanting of the original plant.

6. Is it me or are the Cyclamen through earlier this year? It’s taken years of lifting and moving seedlings around but  I have them in several areas of the garden now. They seed easily in my gravel paths. I love seeing them emerge from a patch of seemingly bare earth but they also, sadly, mark the end of summer to me. 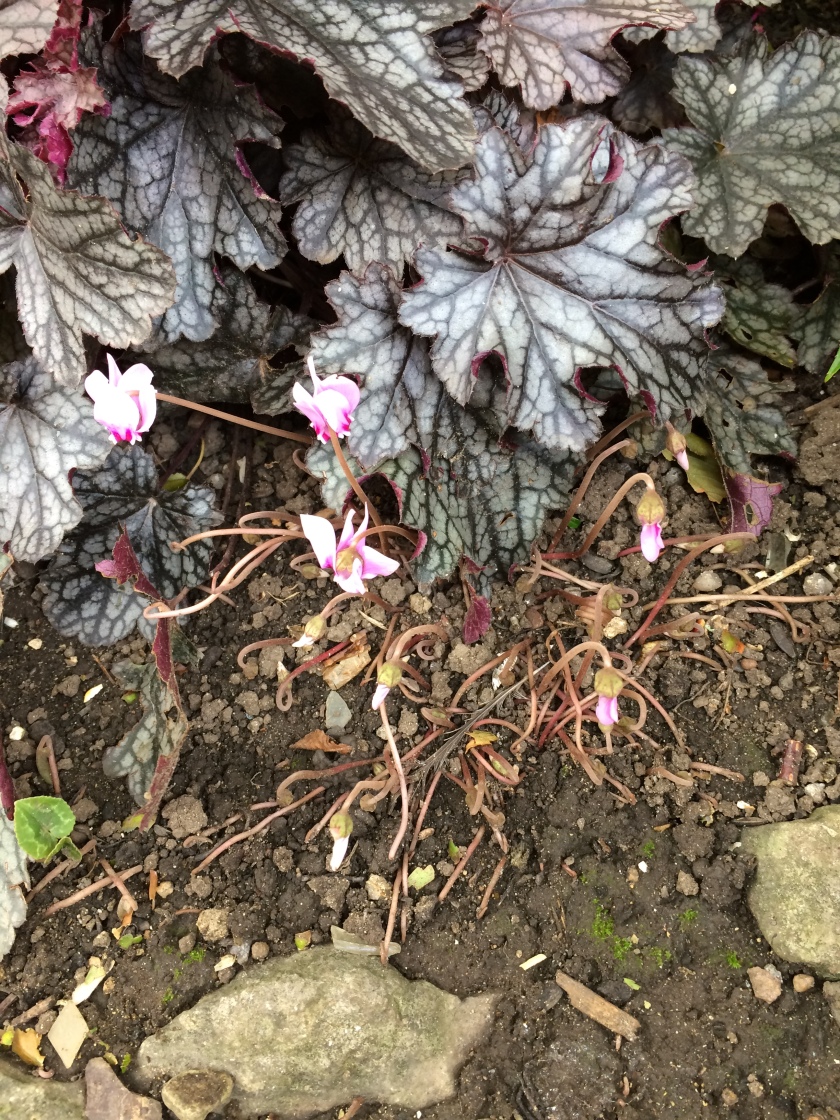 Talk of the end of summer is a bit of a sad note to end on, sorry, so cheer yourself up by visiting other Sixers gardens courtesy of our host at